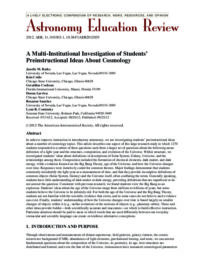 A Multi-Institutional Investigation of Students’ Pre-instructional Ideas About Cosmology

In order to improve instruction in introductory astronomy, we are investigating students’ preinstructional ideas about a number of cosmology topics. This article describes one aspect of this large research study in which 1270 students responded to a subset of three questions each from a larger set of questions about the following areas: definition of a light-year and the structure, composition, and evolution of the Universe. Within structure, we investigated students’ ideas about definitions or descriptions of Solar System, Galaxy, Universe, and the relationships among them. Composition included the formation of chemical elements, dark matter, and dark energy, while evolution focused on the Big Bang Theory, age of the Universe, and how the Universe changes over time. Responses were iteratively coded for common themes. Major findings demonstrate that students commonly misidentify the light-year as a measurement of time, and that they provide incomplete definitions of common objects (Solar System, Galaxy) and the Universe itself, often conflating the terms. Generally speaking, students have little understanding of dark matter or dark energy, providing definitions that are superficial or do not answer the question. Consistent with previous research, we found students view the Big Bang as an explosion. Students’ ideas about the age of the Universe range from millions to trillions of years, but some students believe the Universe to be infinitely old. For both the age of the Universe and the Big Bang Theory, students are not familiar with the scientific evidence that exists, and in some cases do not believe such evidence can exist. Finally, students’ understanding of how the Universe changes over time is based largely on smaller changes of objects within it (e.g., stellar evolution) or the motions of objects (e.g., planetary orbits). These and other ideas provide fodder—both scientifically accurate and inaccurate—on which to build effective instruction. Particular attention should be paid to areas in which words that are used differently between our everyday vernacular and scientific language can create or reinforce alternative conceptions.