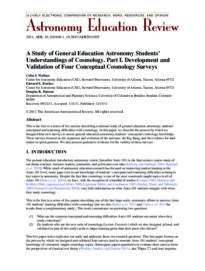 A Study of General Education Astronomy Students’ Understandings of Cosmology. Part I. Development and Validation of Four Conceptual Cosmology Surveys

This is the first in a series of five articles describing a national study of general education astronomy students’ conceptual and reasoning difficulties with cosmology. In this paper, we describe the process by which we designed four new surveys to assess general education astronomy students’ conceptual cosmology knowledge. These surveys focused on the expansion and evolution of the universe, the Big Bang, and the evidence for dark matter in spiral galaxies. We also present qualitative evidence for the validity of these surveys.