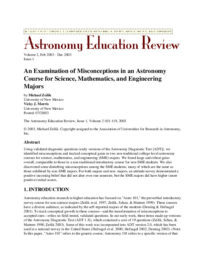 An Examination of Misconceptions in an Astronomy Course for Science, Mathematics, and Engineering Majors

Using validated diagnostic questions (early versions of the Astronomy Diagnostic Test [ADT]), we identified misconceptions and tracked conceptual gains in two non-traditional college-level astronomy courses for science, mathematics, and engineering (SME) majors. We found large and robust gains overall, comparable to those in a non-traditional introductory course for non-SME students. We also discovered some disturbing misconceptions among the SME students, many of which are the same as those exhibited by non-SME majors. For both majors and non—majors, an attitude survey demonstrated a positive incoming belief that did not alter over one semester, but the SME majors did have higher (more positive) initial scores.

Do Science Demonstrations in the Planetarium Enhance Learning?
Back to items list