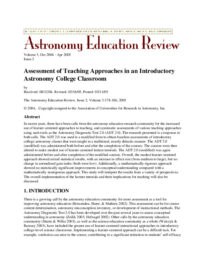 Assessment of Teaching Approaches in an Introductory Astronomy College Classroom

In recent years, there have been calls from the astronomy education research community for the increased use of learner-centered approaches to teaching, and systematic assessments of various teaching approaches using such tools as the Astronomy Diagnostic Test 2.0 (ADT 2.0). The research presented is a response to both calls. The ADT 2.0 was used in a modified form to obtain baseline assessments of introductory college astronomy classes that were taught in a traditional, mostly didactic manner. The ADT 2.0 (modified) was administered both before and after the completion of the courses. The courses were then altered to make modest use of learner-centered lecture tutorials. The ADT 2.0 (modified) was again administered before and after completion of the modified courses. Overall, the modest learner-centered approach showed mixed statistical results, with an increase in effect size (from medium to large), but no change in normalized gain index (both were low). Additionally, a mathematically rigorous approach showed no statistically significant improvements in conceptual understanding compared with a mathematically nonrigorous approach. This study will interpret the results from a variety of perspectives. The overall implementation of the lecture tutorials and their implications for teaching will also be discussed.