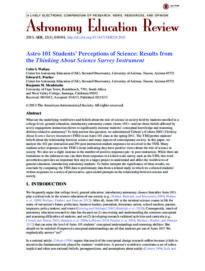 Astro 101 Students' Perceptions of Science: Results from the Thinking About Science Survey Instrument

What are the underlying worldviews and beliefs about the role of science in society held by students enrolled in a college-level, general education, introductory astronomy course (Astro 101)—and are those beliefs affected by active engagement instruction shown to significantly increase students' conceptual knowledge and reasoning abilities related to astronomy? To help answer this question, we administered Cobern's (Cobern 2001) Thinking About Science Survey Instrument (TSSI) to an Astro 101 class in the spring 2011. The TSSI probes students' beliefs about the relationship between science and many aspects of contemporary society. In this paper, we analyze the 442 pre-instruction and 294 post-instruction student responses we received to the TSSI. Many students select responses to the TSSI's items indicating they have positive views about the role of science in society. We also see a slight increase in the number of positive responses pre- to post-instruction. While there are limitations to the inferences one can draw from responses to a Likert scale survey such as the TSSI, this work nevertheless provides an important first step in a larger project to understand and affect the worldviews of general education, introductory astronomy students. To better interpret the significance of these results, we conclude by comparing the TSSI data to preliminary data from a related study in which we collected students' written responses to a series of provocative, open-ended prompts on the relationship between science and society.

Astronomy Education Review: An Afterword
Back to items list