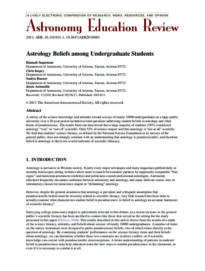 A survey of the science knowledge and attitudes toward science of nearly 10000 undergraduates at a large public university over a 20-year period included several questions addressing student beliefs in astrology and other forms of pseudoscience. The results from our data reveal that a large majority of students (78%) considered astrology “very” or “sort of” scientific. Only 52% of science majors said that astrology is “not at all” scientific. We find that students’ science literacy, as defined by the National Science Foundation in its surveys of the general public, does not strongly correlate with an understanding that astrology is pseudoscientific, and therefore belief in astrology is likely not a valid indicator of scientific illiteracy.

Teachers as learners: A case study of teachers’ understanding of Astronomy concepts and processes in an ACE course