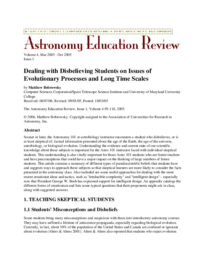 Sooner or later, the Astronomy 101 or astrobiology instructor encounters a student who disbelieves, or is at least skeptical of, factual information presented about the age of the Earth, the age of the universe, astrobiology, or biological evolution. Understanding the evidence and current state of our scientific knowledge about these subjects is important for the Astro 101 instructor faced with individual skeptical students. This understanding is also vitally important for those Astro 101 students who are future teachers and have preconceptions that could have a major impact on the thinking of large numbers of future students. This article contains a summary of different types of pseudoscientific beliefs that students have and suggests ways to approach these subjects so that skeptical learners are more likely to consider the facts presented in the astronomy class. Also included are some useful approaches for dealing with the more recent creationist ideas and tactics, such as “irreducible complexity” and “intelligent design”—especially now that President George W. Bush has expressed support for intelligent design. An appendix catalogs the different forms of creationism and lists some typical questions that their proponents might ask in class, along with suggested answers.