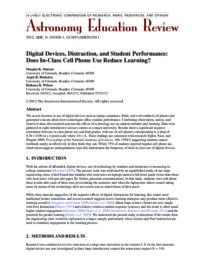 The recent increase in use of digital devices such as laptop computers, iPads, and web-enabled cell phones has generated concern about how technologies affect student performance. Combining observation, survey, and interview data, this research assesses the effects of technology use on student attitudes and learning. Data were gathered in eight introductory science courses at a major university. Results show a significant negative correlation between in-class phone use and final grades, with use of cell phones corresponding to a drop of 0.36 6 0.08 on a 4-point scale where 4.0 1⁄4 A. These findings are consistent with research (Ophir, Nass, and Wagner 2009, Proceedings of the National Academy of Sciences, 106, 15583) suggesting students cannot multitask nearly as effectively as they think they can. While 75% of students reported regular cell phone use, observation suggests undergraduates typically underreport the frequency of their in-class use of digital devices.

The Hetu’u Global Network: Measuring the Distance to the Sun Using the June 5th/6th Transit of Venus
Back to items list