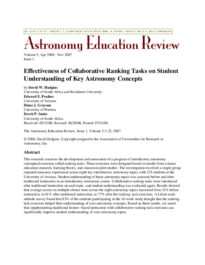 This research concerns the development and assessment of a program of introductory astronomy conceptual exercises called ranking tasks. These exercises were designed based on results from science education research, learning theory, and classroom pilot studies. The investigation involved a single-group repeated measures experiment across eight key introductory astronomy topics with 253 students at the University of Arizona. Student understanding of these astronomy topics was assessed before and after traditional instruction in an introductory astronomy course. Collaborative ranking tasks were introduced after traditional instruction on each topic, and student understanding was evaluated again. Results showed that average scores on multiple-choice tests across the eight astronomy topics increased from 32% before instruction, to 61% after traditional instruction, to 77% after the ranking-task exercises. A Likert scale attitude survey found that 83% of the students participating in the 16-week study thought that the ranking-task exercises helped their understanding of core astronomy concepts. Based on these results, we assert that supplementing traditional lecture-based instruction with collaborative ranking-task exercises can significantly improve student understanding of core astronomy topics.

Swedish Upper Secondary Students’ Views of the Origin and Development of the Universe
Hands on CERN: a well-used physics education project
Back to items list