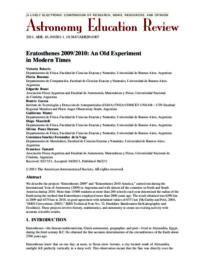 We describe the projects “Eratosthenes 2009” and “Eratosthenes 2010 America,” carried out during the International Year of Astronomy (2009) in Argentina and with almost all the countries in North and South America during 2010. More than 15 000 students at more than 200 schools each year determined the radius of the Earth using the method that Eratosthenes employed more than 2000 years ago. The result obtained was 6290 km in 2009 and 6375 km in 2010, in good agreement with tabulated values of 6371 km [McCarthy and Petit, 2004, “IERS Conventions (2003),” IERS Technical Note No. 32, Frankfurt: Bundesamts für Kartographie und Geodäsie]. These projects involve history, mathematics, and astronomy to create an exciting activity with accurate scientific results.

Planetariums, theatres of the Universe
Back to items list