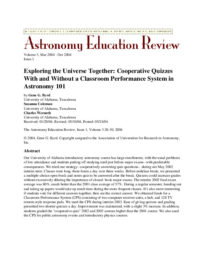 Exploring the Universe Together: Cooperative Quizzes With and Without a Classroom Performance System in Astronomy 101

Our University of Alabama introductory astronomy course has large enrollments, with the usual problems of low attendance and students putting off studying until just before major exams—with predictable consequences. We tried one strategy—cooperatively answering quiz questions—during our May 2002 interim term. Classes were long: three hours a day over three weeks. Before midclass break, we presented a multiple-choice open-book-and-notes quiz to be answered after the break. Quizzes could increase grades without excessively diluting the importance of closed—book major exams. The interim 2002 final exam average was 80%, much better than the 2001 class average of 57%. During a regular semester, handing out and taking up papers would take up much time during the more frequent classes. It’s also more interesting if students vote for different answers together, then see the correct answer. We obtained funds for a Classroom Performance System (CPS) consisting of two computer receiver units, a hub, and 128 TV remote-style response pads. We used the CPS during interim 2003. Ease of giving quizzes and grading permitted two shorter quizzes a day. Improvement was maintained, with a slight 3% increase. In addition, students graded the “cooperative quiz” 2002 and 2003 courses higher than the 2001 course. We also used the CPS for public astronomy events and introductory physics courses.

Radioastronomy: A Broader Look
Robotic Telescopes Give Kids a Cosmic Classroom
Back to items list