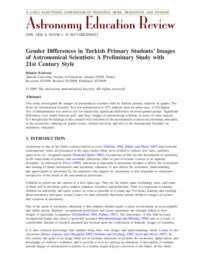 This study investigated the images of astronomical scientists held by Turkish primary students by gender. The Draw an Astronomical Scientist Test was administered to 472 students from an urban area. A Chi-Square Test of Independence was used to test for statistically significant differences between gender groups. Significant differences were found between girls’ and boys’ images of astronomical scientists in terms of some aspects. It is thought that the findings of this research will contribute to the development of universal astronomy education, to the researchers studying on gender issues, cultural diversity, and also to the international literature on astronomy education.