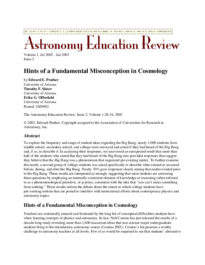 Hints of a Fundamental Misconception in Cosmology

To explore the frequency and range of student ideas regarding the Big Bang, nearly 1,000 students from middle school, secondary school, and college were surveyed and asked if they had heard of the Big Bang and, if so, to describe it. In analyzing their responses, we uncovered an unexpected result that more than half of the students who stated that they had heard of the Big Bang also provided responses that suggest they believe that the Big Bang was a phenomenon that organized pre-existing matter. To further examine this result, a second group of college students was asked specifically to describe what existed or occurred before, during, and after the Big Bang. Nearly 70% gave responses clearly stating that matter existed prior to the Big Bang. These results are interpreted as strongly suggesting that most students are answering these questions by employing an internally consistent element of knowledge or reasoning (often referred to as a phenomenological primitive, or p-prim), consistent with the idea that “you can’t make something from nothing.” These results inform the debate about the extent to which college students have pre-existing notions that are poised to interfere with instructional efforts about contemporary physics and astronomy topics.