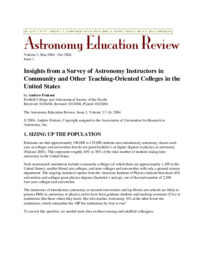 Estimates are that approximately 100,000 to 125,000 students take introductory astronomy classes each year at colleges and universities that do not grant bachelor’s or higher degrees in physics or astronomy ([Fraknoi 2001]). This represents roughly 40% to 50% of the total number of students taking intro astronomy in the United States. Such nonresearch institutions include community colleges (of which there are approximately 1,200 in the United States), smaller liberal arts colleges, and state colleges and universities with only a general science department. The ongoing statistical reports from the American Institute of Physics indicate that about 830 universities and colleges grant physics degrees (bachelor’s and up), out of the total number of 2,200 four-year colleges and universities. The instructors of introductory astronomy at research universities and top liberal arts schools are likely to possess PhDs in astronomy or physics and to have been graduate students and teaching assistants (TAs) at institutions like those where they teach. But who teaches Astronomy 101 at the other lower tier institutions, which outnumber the AIP list institutions by four to one?
To answer this question, we needed more data on these unsung and untallied colleagues.

Foothill College and Astronomical Society of the Pacific

What Do Teachers See in an “Exemplary” Astronomy Video?