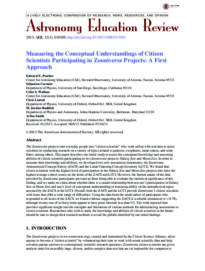 The Zooniverse projects turn everyday people into “citizen scientists” who work online with real data to assist scientists in conducting research on a variety of topics related to galaxies, exoplanets, lunar craters, and solar flares, among others. This paper describes our initial study to assess the conceptual knowledge and reasoning abilities of citizen scientists participating in two Zooniverse projects: Galaxy Zoo and Moon Zoo. In order to measure their knowledge and abilities, we developed two new assessment instruments, the Zooniverse Astronomical Concept Survey (ZACS) and the Lunar Cratering Concept Inventory (LCCI). We found that citizen scientists with the highest level of participation in the Galaxy Zoo and Moon Zoo projects also have the highest average correct scores on the items of the ZACS and LCCI. However, the limited nature of the data provided by Zooniverse participants prevents us from being able to evaluate the statistical significance of this finding, and we make no claim about whether there is a causal relationship between one’s participation in Galaxy Zoo or Moon Zoo and one’s level of conceptual understanding or reasoning ability on the astrophysical topics assessed by the ZACS or the LCCI. Overall, both the ZACS and the LCCI provide Zooniverse’s citizen scientists with items that offer a wide range of difficulties. Using the data from the small subset of participants who responded to all items of the ZACS, we found evidence suggesting the ZACS is a reliable instrument (a 1⁄4 0.78), although twenty-one of its forty items appear to have point biserials less than 0.3. The work reported here provides significant insight into the strengths and limitations of various methods for administering assessments to citizen scientists. Researchers who wish to study the knowledge and abilities of citizen scientists in the future should be sure to design their research methods to avoid the pitfalls identified by our initial findings.

Apparent Motion Of The Sun, Shadows Of Objects And Measurement Of Time In The View Of Seventh Grade Students Of Middle School

Galaxy Zoo: Motivations of Citizen Scientists
Back to items list