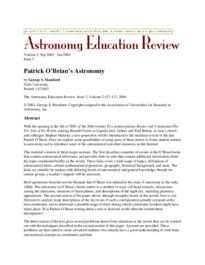 With the opening in the fall of 2003 of the 20th Century Fox motion picture Master and CommanderThe Far Side of the World, starring Russell Crowe as Captain Jack Aubrey and Paul Belany as Jack’s friend and colleague Stephen Maturin, a new generation will be introduced to the maritime novels of the late Patrick O’Brian. Here we explore some possibilities of using parts of these stories to foster student interest in astronomy and to introduce some of the astronomical and other resources on the Internet. This material consists of three major sections. The first describes a number of scenes in the O’Brian books that contain astronomical references, and provides links to sites that contain additional information about the topics mentioned briefly in the novels. These links cover a wide range of topics: definitions of astronomical terms, certain mathematical expressions, geography, historical background, and more. The links are suitable for readers with differing levels of astronomical and general knowledge, though for certain groups, a teacher’s support will be necessary. Brief quotations from the novels illustrate that O’Brian was attuned to the state of astronomy in the early 1800s. The astronomy in O’Brian’s books enters in a number of ways: off-hand remarks, discussions among the characters, mentions of lunar phases, and descriptions of the night sky, including planetary appearances. The second section of the paper shows, through examples based on the novels, how to use freeware to analyze some descriptions of the sky to see if such a configuration actually occurred at the time mentioned, and to determine a possible range of dates during which a particular incident might have taken place. Was Patrick O’Brian writing about a real or fictional world when he created these descriptions? The third section of the text gives several problems drawn from situations in the novels that can be worked out with the techniques described in the second section of this paper. Answers are provided. These problems are best suited to more advanced students who already have a good understanding of such basic astronomical concepts as coordinates and time.

Goals for “Astro 101:” Report on Workshops for Department Leaders
Back to items list