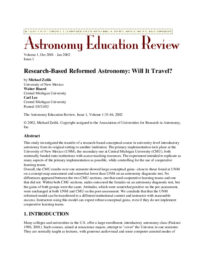 Research-Based Reformed Astronomy: Will It Travel?

This study investigated the transfer of a research-based conceptual course in university-level introductory astronomy from its original setting to another institution. The primary implementation took place at the University of New Mexico (UNM), the secondary one at Central Michigan University (CMU), both minimally funded state institutions with scarce teaching resources. The experiment intended to replicate as many aspects of the primary implementation as possible, while controlling for the use of cooperative learning teams. Overall, the CMU results over one semester showed large conceptual gains—close to those found at UNM on a concept map assessment and somewhat lower than UNM on an astronomy diagnostic test. No differences appeared between the two CMU sections, one that used cooperative learning teams and one that did not. Within both CMU sections, males outscored the females on an astronomy diagnostic test, but the gains of both groups were the same. Attitudes, which were somewhat positive on the pre-assessment, were unchanged at both UNM and CMU on the post-assessment. We conclude that that the UNM reformed model can be transferred to a different institutional context and instructor with reasonable success. Instructors using this model can expect robust conceptual gains, even if they do not implement cooperative learning teams.

A “Thinking Journey” to the Planets Using Scientific Visualization Technologies: Implications to Astronomy Education
Education Notes: Outreach: Why You Should Do It, and How to Succeed
Back to items list