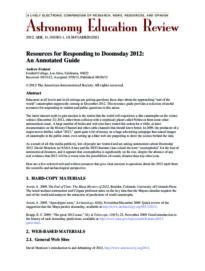 Resources for Responding to Doomsday 2012: An Annotated Guide

Educators at all levels and in all settings are getting questions these days about the approaching “end of the world” catastrophes supposedly coming in December 2012. This resource guide provides a selection of useful resources for responding to student and public questions in this arena.

The latest internet myth to gain traction is the notion that the world will experience a dire catastrophe on the winter solstice (December 21) 2012, either from collision with a (mythical) planet called Nibiru or from some other astronomical cause. A large number of books and web sites have touted this notion for a while, as have documentaries on the History Channel and other cable channels that should know better. In 2009, the producers of a major movie thriller, called “2012,” spent quite a bit of money on a huge advertising campaign that seared images of catastrophe in the public mind, even setting up a fake web site purporting to show the science behind the idea.

As a result of all this media publicity, lots of people are worried and are asking astronomers about Doomsday 2012. David Morrison (at NASA Ames and the SETI Institute) has coined the term “cosmophobia” for the fear of astronomical disasters, and it appears that cosmophobia is significantly on the rise, despite the absence of any real evidence that 2012 will be a worse time for possibilities of cosmic disaster than any other year.

Here are a few selected web and written resources that give clear answers to questions about the 2012 myth from the scientific and archaeological perspective.

The Hetu’u Global Network: Measuring the Distance to the Sun Using the June 5th/6th Transit of Venus