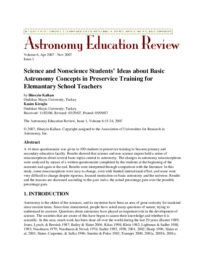 A 14-item questionnaire was given to 100 students in preservice training to become primary and secondary education faculty. Results showed that science and non-science majors held a series of misconceptions about several basic topics central to astronomy. The changes in astronomy misconceptions were analyzed by means of a written questionnaire completed by the students at the beginning of the semester and again at the end. Results were interpreted through comparison with the literature. In this study, some misconceptions were easy to change, even with limited instructional effort, and some were very difficult to change despite rigorous, focused instruction on basic astronomy and the universe. Results and the reasons are discussed according to the gain index, the actual percentage gain over the possible percentage gain.

This I Understand: The Importance of Banning the B-Word from Science
Back to items list