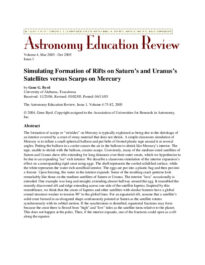 The formation of scarps or “wrinkles” on Mercury is typically explained as being due to the shrinkage of an interior covered by a crust of stony material that does not shrink. A simple classroom simulation of Mercury is to inflate a small spherical balloon and put belts of frosted plastic tape around it at several angles. Putting the balloon in a cooler causes the air in the balloon to shrink like Mercury’s interior. The tape, unable to shrink with the balloon, creates scarps. Conversely, many of the medium-sized satellites of Saturn and Uranus show rifts extending for long distances over their outer crusts, which we hypothesize to be due to an expanding “ice”-rich interior. We describe a classroom simulation of the interior expansion’s effect on a nonexpanding rigid crust using eggs. The shell represents the cooled solidified surface, while the white represents the water-rich semifluid interior. The eggs are put into a plastic bag and then put into a freezer. Upon freezing, the water in the interior expands. Some of the resulting crack patterns look remarkably like those on the medium satellites of Saturn or Uranus. The interior “lava” occasionally is extruded. One example was long and straight, extending almost halfway around the egg. It resembled the recently discovered rift and ridge extending across one side of the satellite Iapetus. Inspired by this resemblance, we think that the crusts of Iapetus and other satellites with similar features have a global crustal structure weaker to tension 90° to the global lines. For an equatorial rift, assume that a satellite’s solid crust formed in an elongated shape continuously pointed at Saturn as the satellite rotates synchronously with its orbital motion. If the synchronism is disturbed, equatorial fractures may form because the crust there is flexed from “high” and “low” tides as the satellite turns relative to the planet. This does not happen at the poles. Then, if the interior expands, one of the fractures could open as a rift along the equator.

Trends of Thesis and Dissertation on Education in Astronomy in Brazil
Earth And Heavens: Two Separate Universes?
Back to items list