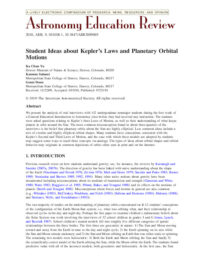 We present the analysis of oral interviews with 112 undergraduate nonmajor students during the first week of a General Education Introduction to Astronomy class before they had received any instruction. The students were asked questions relating to Kepler’s three Laws of Motion, as well as their understanding of what keeps planets in orbit around the Sun. The most common misconception found in about three-quarters of the interviews is the belief that planetary orbits about the Sun are highly elliptical. Less common ideas include a mix of circular and highly elliptical orbital shapes. Many students have conceptions consistent with the Kepler’s Second and Third Laws of Motion, and the ease with which these models are adopted by students may suggest some ways to teach these concepts via analogy. The types of ideas about orbital shapes and orbital behavior may originate in common depictions of orbits often seen in print and on the Internet.

Do Concept Inventories Actually Measure Anything?