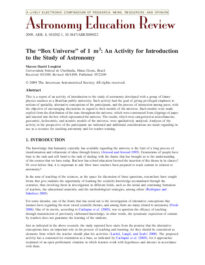 The “Box Universe” of : An Activity for Introduction to the Study of Astronomy

This is a report of an activity of introduction to the study of astronomy developed with a group of future physics teachers at a Brazilian public university. Such activity had the goal of giving privileged emphasis to notions of spatiality, alternative conceptions of the participants, and the process of interaction among peers, with the objective of encouraging discussions in regard to their models of the universe. Such models were made explicit from the distribution of the stars throughout the universe, which were constructed from clippings of paper and inserted into the box which represented the universe. The results, which were categorized as miscellaneous, geocentric, heliocentric, and acentric models of the universe, were qualitatively analyzed. Analyses of the activity in the perspective of the participants are indicated and additional considerations are made regarding its use as a resource for teaching astronomy and for teacher training.

The Universe in a Box: Introduction to the Study of Astronomy in the Initial Formation of Physics Teachers
Back to items list