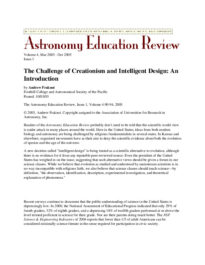 The Challenge of Creationism and Intelligent Design: An Introduction

Readers of the Astronomy Education Review probably don’t need to be told that the scientific world view is under attack in many places around the world. Here in the United States, ideas from both modern biology and astronomy are being challenged by religious fundamentalists in several states. In Kansas and elsewhere, organized movements have as their aim to deny the scientific evidence about both the evolution of species and the age of the universe.

Foothill College and Astronomical Society of the Pacific

Using Role-Playing Games to Teach Astronomy: An Evaluation
Back to items list