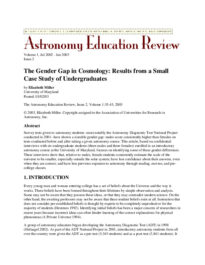 The Gender Gap in Cosmology: Results from a Small Case Study of Undergraduates

Survey tests given to astronomy students—most notably the Astronomy Diagnostic Test National Project conducted in 2001—have shown a sizeable gender gap: males score consistently higher than females on tests conducted before and after taking a given astronomy course. This article, based on confidential interviews with six undergraduate students (three males and three females) enrolled in an introductory astronomy course at the University of Maryland, focuses on identifying some of these gender differences. These interviews show that, relative to males, female students consistently estimate the scale of the universe to be smaller, especially outside the solar system; have less confidence about their answers, even when they are correct; and have less previous exposure to astronomy through reading, movies, and pre-college classes.