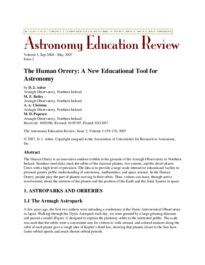 The Human Orrery: A New Educational Tool for Astronomy

The Human Orrery is an innovative outdoor exhibit in the grounds of the Armagh Observatory in Northern Ireland. Stainless steel disks mark the orbits of the classical planets, two comets, and the dwarf planet Ceres with a high level of precision. The idea is to provide a large-scale interactive educational facility to promote greater public understanding of astronomy, mathematics, and space science. In the Human Orrery, people play the part of planets moving in their orbits. Thus, visitors can learn, through active involvement, about the motions of the planets and the position of the Earth and the Solar System in space.