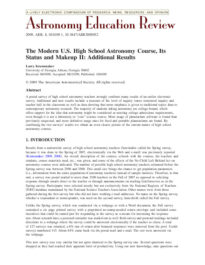 The Modern U.S. High School Astronomy Course, its Status and Makeup, and the Effects of No Child Left Behind

A 2007 nationwide mixed-methods survey of high school astronomy teachers reports on its current characteristics and its changes over intervening decades that included the introduction of standards and the No Child Left Behind Act (NCLB). Some changes found include section enrollments trending downward even while the total number of courses offered and attending students are actually increasing. The teacher gender gap has been dramatically reduced; most teachers come from geosciences and biosciences. 15% of them have never had an astronomy course. The majority of teachers say NCLB has had no direct effect, but 40% report indirect effects. These are mostly negative reactions to school-wide adequate yearly progress status: teacher redeployment, funding diversions, students tracked into the traditional three sciences, course cancellations, and teacher job loss. Some positive NCLB effects are increased math and literacy rigor and, paradoxically in some places, enrollment increases. A stereotypical picture of a high school astronomy course is developed noting some changes in the 22 years since the last study of the field.

Department of Mathematics and Science Education, University of Georgia