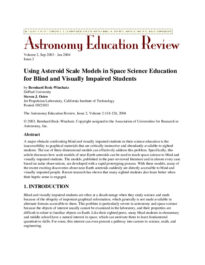 A major obstacle confronting blind and visually impaired students in their science education is the inaccessibility to graphical materials that are critically instructive and abundantly available to sighted students. The use of three-dimensional models can effectively address this problem. Specifically, this article discusses how scale models of near-Earth asteroids can be used to teach space science to blind and visually impaired students. The models, published in the peer-reviewed literature and in almost every case based on radar observations, are developed with a rapid prototyping process. With these models, many of the recent exciting discoveries about near-Earth asteroids suddenly are directly accessible to blind and visually impaired people. Recent research has shown that many sighted students also learn better when their haptic sense is engaged.