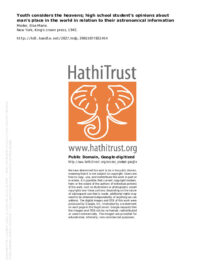 Youth considers the heavens; high school student's opinions about man's place in the world in relation to their astronomical information

The testing instruments and the teaching instrument appeared to be in a
form suitable for objective study of the problem. Three groups of eleventh-
and twelfth-grade physics students participated in an experiment lasting for fourteen school days. All the subjects in all the groups were given the tests on the first two and last two days of the experimental period ; the ten inter vening days were spent differently by each of the three groups. During this time, one group studied The Spangled Heavens, reading the material and answering the questions asked in but holding no class discussions until after the experimental period. The students in the second group engaged in such activities as their teachers preferred for the purpose of developing an enlarged comprehension of the physical universe and its vastness there was free class discussion. The third group served as control these students con tinued with their usual work in physics. [...] The students who participated in the second group were taught in what ever way their teachers deemed the most effective from their knowledge of themselves and of their students. Some of these teachers requested and re ceived copies of The Spangled Heavens to use as reference material. All of them were given copies of the generalizations used in writing the pamphlet as a definition of the area within which they were to teach.