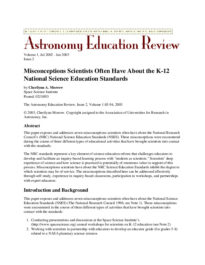 This paper exposes and addresses seven misconceptions scientists often have about the National Research Council’s (NRC) National Science Education Standards (NSES). These misconceptions were encountered during the course of three different types of Educational activities that have brought scientists into contact with the standards. The NRC standards represent a key element of science Education reform that challenges educators to develop and facilitate an inquiry-based learning process with “students as scientists.” Scientists’ deep experience of science and how science is practiced is potentially of enormous value in support of this process. Misconceptions scientists have about the NRC Science Education Standards inhibit the degree to which scientists may be of service. The misconceptions described here can be addressed effectively through self-study, experience in inquiry-based classrooms, participation in workshops, and partnerships with expert educators.

The Gender Gap in Cosmology: Results from a Small Case Study of Undergraduates